Michelle Napell Selected as the Next Executive Director at JFCS 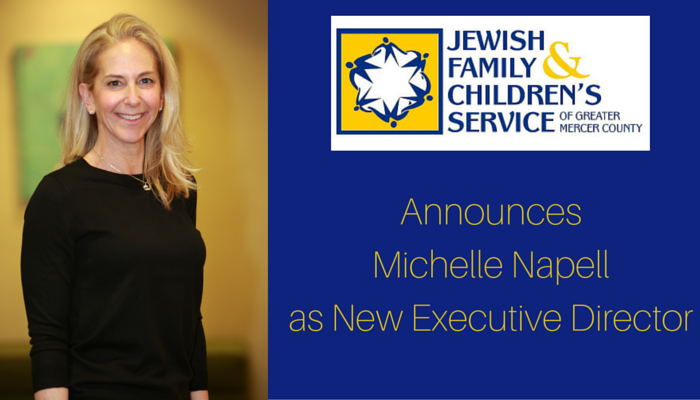 The Board of Directors of Jewish Family & Children’s Service of Greater Mercer County (JFCS) announced that it has selected Michelle Napell to become the agency’s next Executive Director. Ms. Napell will succeed Linda Meisel, who announced earlier this year that she is stepping down on June 30th, after 18 years as Executive Director. Michelle Napell will take over the role on July 1, 2016.

Ms. Napell is currently the Executive Director at OneFamily. When she joined OneFamily, there was limited awareness of the organization in the US. Now, there is a strong Board of Directors and a broad base of support with a shared passion geared toward supporting the thousands of victims of terror living in Israel.

On behalf of the JFCS Board of Directors, President Audrey Wisotsky said, “The Board is delighted that Michelle has accepted our offer to lead the Agency into the next chapter of its history. She is a visionary leader who we are confident will strategically guide the Agency and advance and develop the critical programs we provide to the community.  I want to thank the members of the search committee, chaired by Joyce Kalstein, for the many hours of conscientious work that they did leading to this excellent result.”

A graduate of Cardozo School of Law, Michelle practiced for 3 years before “retiring” to start her family. In January 2010 Michelle was hired by OneFamily, as the Coordinator of Programming and Special Events, she was promoted in June 2011 to Executive Director of US operations. Michelle lives in central New Jersey with her husband and two children.

In accepting the role of Executive Director, Michelle Napell said, “Being a part of JFCS will enable me to leverage my passion and experience to make an equally important difference – this time closer to home. I hope to build off the strong programming and base of support that already exists and engage new supporters throughout Mercer and Bucks Counties.”